A short summary about the establishment of SEIKLEJA.COM in 2002, how and with whom the merger happened and how it became the adventure company 360 KRAADI.

This is the year that everybody will remember because of COVID-19. We can say that because of all the isolation requirements 360 KRAADI developed number of smart games that people can play on their smart devices. We also launched our e-shop where it is easy to shop games, tickets t public events and 360 KRAADI gift cards. Smart games can be palyed in biggest cities in Estonia and some games do not need any specific location. Our e-shop is a good place to keep eye on since it is a place where all new products and public events are published.

A new phase started on 1 May 2019 – the adventure company 360 KRAADI went fully under the ownership of the event marketing company Frank Events OÜ. The two brands continue to operate separately, the selection of services will also be separate. The only change is that Frank Events OÜ is the legal entity. We will upgrade our inventory, increase the selection of games in different languages and we are planning to create new games, etc.

We organise fatbike trips across Estonia. The trips have been well received! People like combined hikes – we ride canoes to the bog, where we take a snowshoe hike. The most sought-after hike is the snowshoe hike!
People taking part in summer events can now have fun on giant SUP boards that hold 8 people.

We replace all of our two-seater kayaks with plastic ones. We have plans to buy bicycles with wide tires and by the end of the year we have 21 bicycles. A portable sauna tent is added to the hikes. All of the hikes with a sauna tent to the islets of Hiiumaa are booked.

The first portable Exit Room in Estonia is completed. We stop offering climbing activities. We update our website and launch a new version.

We acquire two-seater canoes for hikes and renting out. We move the warehouse of the camping equipment rental to Leiva street in Tallinn. In the games division, the new hit is the long-planned game Film Festival.

The hiking guide Raimo Sindonen joins the team of the hiking division. Teamwork related hiking events are added to the nature hikes.

A separate undertaking Loquiz OÜ that offers the rental of game platforms across the world grows out of the development of team building games with tablet computers.
In collaboration with Hype, a new special team building game NoEasyDay that polishes communication skills is developed. The first client of the game is Skype.

The GPS era is over and the main tool of team building games will be a tablet computer. We stop using handheld GPS devices and we are the first in the world to start offering games with the special Loquiz game software.

The new website of 360 KRAADI is finalised on 17 March.

A separate trademark Natourest grows out of the offered products that originate from nature hikes. We offer tourists bear observations in Alutaguse via our website www.natourest.ee.

January
Due to confusing disputes about domain names and another reasons, we decided to abandon the name Seikleja.com and continue under the name Adventure company 360 KRAADI.

March
We are the first ones in Estonia to organise hikes with 10-seater team canoes.

Summer
Four corner tour. Under the leadership of Bert, a group of canoers takes a trip to the four cardinal directions – the furthermost interesting points of Estonia (the islands of Piirissaar, Vaindloo, Nootamaa and Ruhnu).
January
Merger with the company Köieronija. The climbing guru Toomas Holmberg joins the team.

September
The opening of the separate website cityfun.ee to introduce short games.

August
The world premiere of the GPS crossword.

June
We obtain a permit to use the site of Eesti Ehitus in Tabasalu.

April/May
Under the direction of Bert, Mihkel and Eric row around Estonia with a kayak in 28 days.

December
About 2,000 clients go on hikes with SEIKLEJA.COM during the course of the year.

October
The companies OLYMPIA in Finland and CLUB ACTIV in Germany start actively selling the rowing packages of SEIKLEJA.

September
Eric undergoes a water rescue training on the river and sea under the guidance of David Grant.

March
SEIKLEJA.COM collaborates with the travel company OLYMPIA in Finland, the beginning of the collaboration with the tourist agency Club Activ in Germany.

February
SEIKLEJA.COM launches a unique ice climbing package in the evenings in Tabasalu.

January
The first skating trip in Estonia takes place on the Soodla Reservoir.

December
About 1,000 clients go on hikes with SEIKLEJA.COM during the course of the year.

July
Bert, Alar and Eric undergo a three-day rowing course under the guidance of S. Storck. Bert, Eric, Albert and Margus row from Estonia to Finland. The route from the island of Naissaare to the Cape of Porkkala takes 7 hours.

June
Eric passes the exam and becomes an accredited kayak guide in Finland.

Winter
The organisation of adventure events and winter days as a hobby.

Summer
17 groups go on kayak adventures during the course of the summer (140 people).

The website of SEIKLEJA.COM, investments in the first kayaks and a trailer.

February
The establishment of OÜ Seikluspuhkus.

Alar, Bert, Eric and friends start with kayak trips on the sea.

Mountain hikes, hikes and river trips of the people involved. 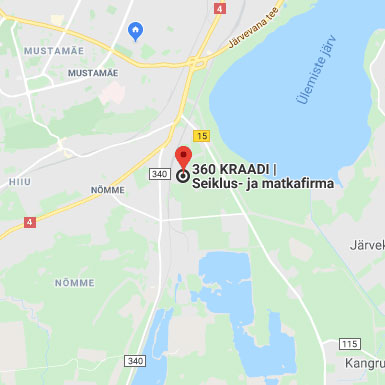